Calcium stearate (CS) and Zinc stearate (ZS) are Metallic stearates. Metallic stearates are lubricants used in multiple plastic and rubber applications. They act as lubricants and acid scavengers during the manufacturing process. It is also used as a co-stabilizer in PVC. Their high melting point enables faster, easier and smooth processing in various industries. 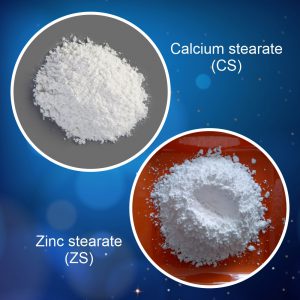 Calcium stearate (Chemical Name: Octadecanoic Acid Calcium Salt) is a carboxylate of calcium, classified as a calcium soap. It is a component of some lubricants, surfactants, as well as many others. It is a white waxy powder.

Calcium stearate is an odourless, white powder used in many manufacturing processes and preparations. It is a carboxylate created by heating stearic acid and calcium oxide.

Calcium stearate has many potential uses, including as a flow agent, stabilizing agent and surface conditioner in the production of certain foods — notably, many candies. It is used as a mold-release agent for pharmaceutical tablets and capsules, as an anti-caking agent in cosmetics and as a thickener in lubricants and greases. It is also a stabilizer found in many plastics and is used to process concrete and paper.

Calcium stearate is harmless, and is insoluble in most solvents. Compared to waxes, it has a comparatively high softening point, and, consequently, do not become greasy at higher temperatures. Calcium stearate is primarily used as lubricant in the plastics industry, an acid scavenger, release agent and, for waterproofing in construction, and as an anti-caking additive in pharmaceuticals and cosmetics.

There are many methods to manufacture Zinc Stearate. In addition to the direct method of combining stearic acid with zinc oxide, there is also an indirect method known as precipitation, which entails the formation of a solid from a liquid solution. The fusion method involves a high-shear process using tightly controlled pressure and temperature conditions.

Zinc Stearate offers a number of chemical properties that are invaluable from a manufacturing perspective.